THE road racing complex once located at 88th & Buckley Road in Commerce City, CO. Opening in 1983, the paved 1.7 mile road course was built on the same property that was once known as Rocky Mountain Dragway (later Thunder Road Dragway) dating back to the early 1960’s. A dirt oval track (Raceland, later Rocky Mountain National Speedway) was built just North of the property in the early 1980’s.
In 1994 another curve was added to the North hairpin of the road course forming a little 1/5 mile oval. The Colorado Automobile Racing Club started running their Modified coupes here with dreams of making the facility their home track.
In 1995, C.A.R.C. President Chris Ertler and many volunteers were instrumental in revamping the facility around the oval with track lighting for night racing, repaving of the oval, and the addition of more grandstands. The old uncovered East stands from Lakeside Speedway were dismantled and trucked over to S.C.R., then reassembled and reseated as the main grandstand along the front chute. Along with the C.A.R.C. Modified class, other divisions were added to the ticket. Econo Stocks, Mini Stocks, I.M.C.A. Modifieds, Dwarf Cars, Legends, R.M.M.S.A. Mini Sprints, and a Vintage division were added to thrill the Friday night race crowds. 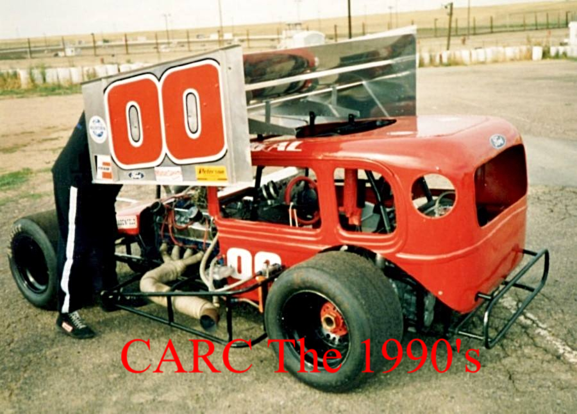 please contact us if you have any pictures or information regarding the 1990's at mrwood.lts4quality@gmail.com