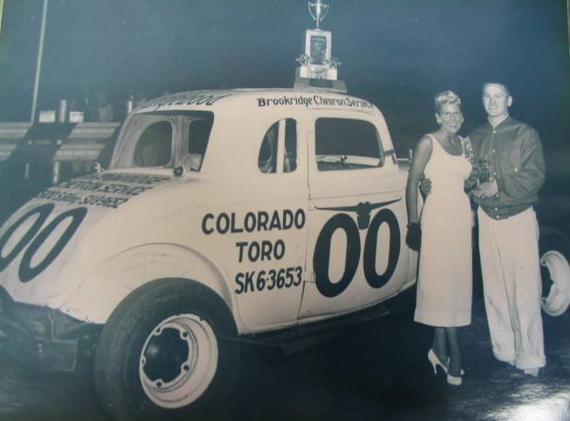 the 1950's really started the coupe movement in colorado!

the driver is Tex Dalton.  I posted a complete story about Tex in Auto Racing Memories a few years ago. tex's son Lee also supplied some short films that I posted on You Tube listed as Englewood Speedway 195?  Tex and his car can be seen in these short films which shows E-Wood in it's dirt days.

tHANKS TO bILL PERatT FOR these comments

Fritz Wilson always seems to be driving more cars than there were seasons during several of these early years.  An explanation is in order here concerning the #53 (1956).  Fritz began driving the purple #53 at the first of the '56 season, a twin to the #63 car, driven by Bill Starks, both listed as owned by Bob Jump.  Somewhere near mid season, according to one of the programs I have, he began driving #114.  About that time there was a disagreement involving Fritz and Blu Plemons with the CARC.  At that point they both finished the season at Englewood speedway.  Since I was commuting from western Nebraska to see the races, I didn't know about that until later when the point standings in the program tipped me off.  I Never did learn the reason for that disagreement with the CARC.   Also, to give credit where credit is due, some of the Fritz Wilson photos are from his album by way of Race Fan 2 who shared them with me, just thought I'd share what I knew.
Bill Peratt

tHANKS TO bILL PERatT FOR SHARING THESE TREASURES